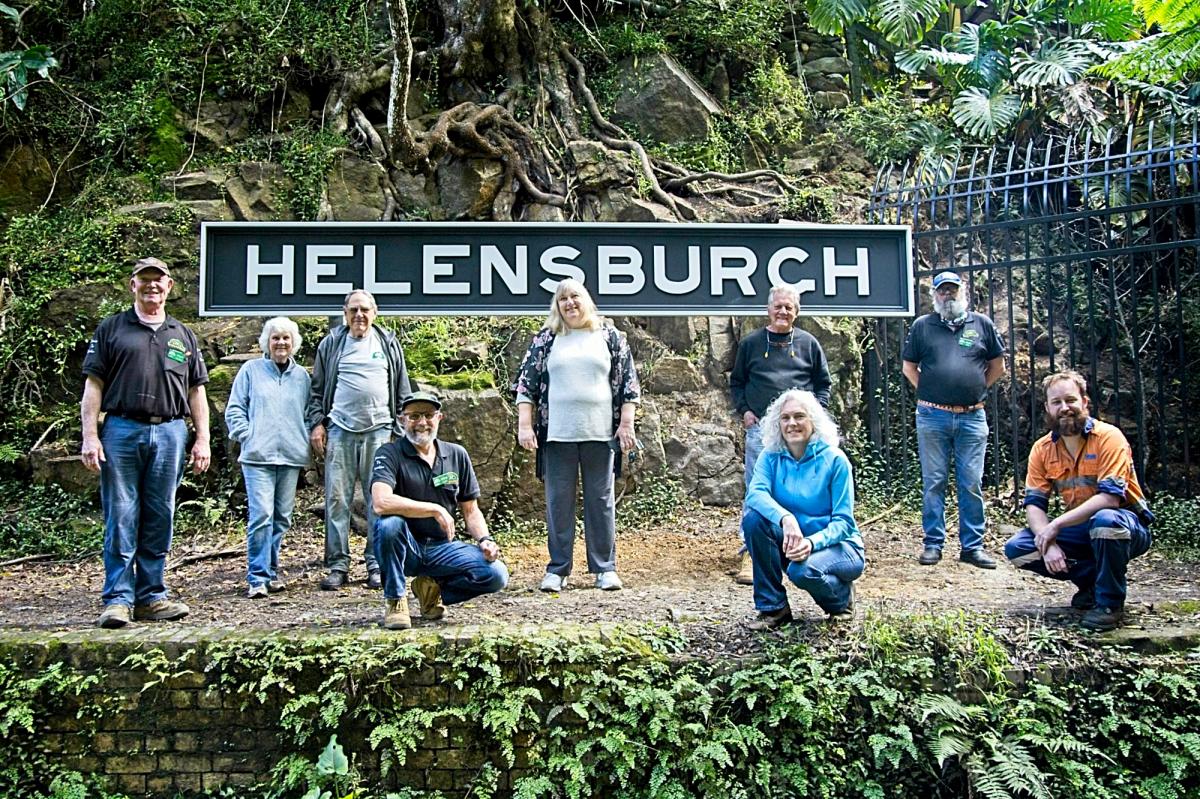 Glow worms, a Ghost and the curious ‘G’: The Station Sign at Helensburgh.

Welcome to spring, where things can only get better. Hello and ngumbi to the Dharawal people, whose connection to this land, water and country we respect and admire. Back in 1889, Henry Parkes is the Premier, Banjo’s writing about Clancy of the Overflow and Bravo wins the Melbourne Cup. And in the town once known as Camp Creek, now Helensburgh, (or as Dr Frederick Cox, the town’s doctor from 1910 to 1942 would say, ‘Helens-BURRA!), the first of January brings the whole town to witness the opening of their very own railway station.

The single-track line had reached the Burgh by 1884, but it took a few more years to see the first Helensburgh Station completed with its single line platform, goods siding, a goods shed, livestock pen and two railway cottages, both of which happily are still standing.

The station, at the junction of Tunnel Road and Vera Street, was located between two tunnels, the short Helensburgh Tunnel (80 metres) and the much longer Metropolitan Tunnel (624 metres, the Glow Worm tunnel). It soon became apparent that the single line was too steep and the increased traffic too much for the small station, with the Otford tunnel particularly notorious for hot and suffocating conditions affecting the crews of steam trains climbing to Waterfall from Thirroul. There were even cases of enginemen burnt by the heat, and passengers were regularly asphyxiated in the tunnel when the trains stalled on the 1 in 40 grades.

Sadly, on the night of the 13th of June 1895, a local miner named Robert Hails was run over and killed by a train heading to Wollongong in one of the tunnels. It is believed he was walking home to Clifton and fell asleep on the tracks. Robert was married with six children and his grave is in the Church of England section at Helensburgh Cemetery. Some say his ghost still chases the trains through the Helensburgh tunnels at night.

And, whilst your writer doesn’t believe in ghosts, he does know about glow worms, and these pugnacious ‘spider-grubs’ have lived in the tunnel for a long time before its recent exposure. Their beautiful display of blue-green stars entranced local children, who would venture in canoes through the giant reed that cloaked the entrance and into the flooded darkness. The glow worms too have had their share of drama, with uncaring ‘visitors’ smoking, using sparklers, flares or other lighting effects and graffitiing. To assist in controlling some of these issues, as well as rubbish and noise problems, a fence and lockable gate was erected to allow the glow worms to regenerate.

Widening the existing tunnels to a double line was not a viable option to overcome the track’s problems, so the first tunnel, the Waterfall Tunnel, was opened out to form a cutting. The Cawley, Helensburgh and Metropolitan tunnels were bypassed by deviations and a new station with uniquely distinctive curved platform and station building was built on the deviation at Helensburgh and opened on 30 May 1915.

In April 1995, Metropolitan Colliery decided to clear sediment and debris at the northern entrance to the tunnel. During this work, a few bricks of the original platform were unearthed. This is where Allan House and Helensburgh Landcare come in.  Allan approached the colliery and sought an excavation of the old station site down to railway sleeper level. The colliery agreed, provided the project was supervised by Allan. In 2001, a Centenary of Federation grant enabled Helensburgh Landcare to further clean up the site, lay ballast and then lay track taken from Metropolitan Colliery on the other side of the tunnel.

So, an old station platform needs an old sign, right? Something for Robert and the glow worms to enjoy. There were three large ‘Helensburgh’ Station signs on the original platform. They were timber framed and backed, painted in black with brass letters painted white, and over 4.4 metres (14 feet) long! The ‘G’ in Helensburgh was in a very distinctive font. These signs were transferred to the new station and repainted white with black lettering. But in 1983 the signs were taken down, the brass lettering removed and the timber backs thrown into a nearby gully. Here they remained, until found and recovered in the early 1990’s by those adventurous local kids.

Only one sign was worth restoring, which was done by Helensburgh Landcare with funds provided by the Federal Government. Originally only ‘railway buffs’ visited the old platform to take photos, but then it became known to the wider YouTube/Instagram community, most of whom seemingly don’t care about the area’s history. The restored sign was erected on the reclaimed original platform and remained untouched until 2012, when several letters were prised off and stolen. A few were returned, but others had to be remade. The sign was taken down, repaired and re-erected on the platform in 2015. But two years later, letters were again prised off and the sign seriously damaged with a hammer and chisel.

Once again, the sign was taken down. It was decided it should be replaced with a more robust replica and Landcare approached the Helensburgh Men’s Shed in 2019 to design, facilitate, assemble and install the new sign. We are very pleased that local businesses contributed to the sign’s creation from all-Australian materials. Col Aldred’s engineering company manufactured the steel frame, Barry Skea from B.S.S created the all-important aluminium letters including that curious G, James Carlson from NexGen Coatings applied the powder-coating and Peabody Coal was a generous sponsor for the project.

Helensburgh Men’s Shed and the local Landcare Group are very pleased to announce that the Shed’s members have eaten a hearty breakfast, been fortified with a strong cup of coffee from Rosie’s Morning Brew and bent their backs into installing the new Helensburgh station sign at the old railway platform and glow worm sanctuary at Tunnel Road. This project, to have a robust and long-lasting sign in place, has been a long-held aspiration of Allan and Merilyn House and all the members of the Helensburgh Landcare Group. The replica will also allow the original platform sign to be fully restored and displayed in a more secure location for the town to enjoy. After 130 years, it is truly a cherished part of Helensburgh’s history that deserves to be well cared for and appreciated.